Find a distributor near you

Eliminating Error and Manual Processes in Fueling Aircraft for an FBO

Yelvington Jet Aviation is a Fixed Base Operator whose fuel trucks and fuel farm were equipped with aging mechanical registers that did not allow for any automation. If there were discrepancies between the amount delivered and the BOL, it was difficult to know where the error came from. By incorporating EMR3 and Datalink into their fueling systems they were able include automation and streamline operations.

At DAB, Yelvington operates a four-tank fuel farm, with fuel trucks carrying both Jet-A and Avgas products. Yelvington also owns and operates a fuel farm and two fuel trucks and provides full service mobile fueling for Spruce Creek Fly-in community just 12 miles from DAB. Apart from the beach attractions that Daytona boasts, DAB is located right next to the Daytona International Speedway, where events like the Daytona 500, Country 500, and many others take place every year. Due to Yelvington’s prime location and its reputation for superior service, they have become a popular FBO for incoming NASCAR teams, celebrities, and other visitors and very often completely fill their 5-acre ramp and three hangars with aircraft needing fuel and other services.

Yelvington’s fuel trucks and fuel farm were equipped with aging mechanical registers and no automation. Transactions were recorded by writing down on a paper ticket the aircraft tail number and totalizer on the register at the beginning and end of the transaction. The line service technician would then walk the ticket to the Customer Service Representative inside the FBO where they would type the transaction information into the computer where they would manually tie to the customer account on file and bill the customer. The staff would spend significant time reviewing transactions, looking for lost or missing tickets, and trying to reconcile when totalizer numbers didn’t match because of forgotten fuel transfers or because numbers on the tickets were transposed. Fuel deliveries from the fuel supplier to the tanks at the fuel farm were also manually entered and reconciled on paper. If there were discrepancies between the amount delivered and the BOL, it was difficult to know where the error came from. 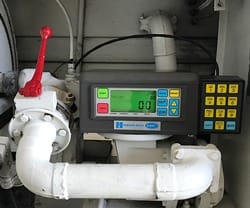 Yelvington also installed Veeder-Root’s TLS4i, and four Mag Plus Probes into the four tanks at the fuel farm. This enhancement enables Yelvington to automatically link tank level information into Datalink, providing a single portal for managing and reconciling EMR3 transactions and tank inventory. Now, when Yelvington receives a delivery, the TLS automatically creates a delivery report to tell Yelvington within fractions of a gallon how much fuel was delivered and how much is in their tanks, eliminating the uncertainty that previously existed.

“Overall, The EMR3 has significantly streamlined our fuel transaction process. It reduced wait time for our customers and allowed us to focus more of our energy on total customer satisfaction.

“The automated process has eliminated three very time-consuming steps. 1) The customer no longer has to wait for line service to fill out a paper ticket, 2) hand carry it to the CSR, and 3) have the CSR enter the ticket into the point of sale software. We were able to go from a process that could take five minutes or much longer if a mistake was made to a process that takes less than 30 seconds from start to finish and zero mistakes.

“Prior to the EMR3 + Datalink, doing meter reconciliations was exceedingly time consuming, often requiring several hours to justify mistakes caused by poor handwriting, forgotten transfers and recirculation’s, and register totalizers entered incorrectly. Now, with the EMR3 + Datalink, our meter reconciliations are a breeze. The automation also allows our company to quickly identify and resolve any unexplained fuel loses, specifically eliminating loss due to mechanical or nefarious means.

“Having the automated system not only saves us time and money, it gives our company the capability to take on more and more business. Vital growth that would have been difficult at best with the manual system we had in place.”